GEM supports Arconic’s engineering and manufacturing operations through a variety of facility upgrades, construction, major repairs, 24/7 support, and general mechanical services. Some of GEM’s most notable work with Arconic includes the replacement of the iconic ALCOA sign, installation of two large trim lines, and the removal and replacement of a model gear box.

GEM played a key role in the removal of the historic ALCOA sign in 2017. Originally built in the 1980s, the sign was regarded as a local icon and considered a significant piece of history. Following the ALCOA and Arconic split, GEM supported the sign removal and installation of the new sign on two sides of the tower to officially introduce the new name.

In 2018, GEM worked with Arconic to design and install an edge trimming capability at the plant to help meet manufacturing demands of automotive products. GEM provided design support, procurement, construction, and installation. GEM managed the site preparation, installation of underground storm and sanitary sewer piping, foundation work, electrical and equipment installation, and commissioning for the facility.

Most recently, the Mechanical Division provided its services during an eight-day outage to replace an old gear box from 1947 with an updated 2020 model. This 120’’ mill gear box is used to control the speed of system operations for the 40+ tons of aluminum blocks that go through the machine. The updated gear box provides additional capabilities that will boost production for the company. During the outage, GEM was responsible for removing spindle carrier supports from the mill, detaching lines and hoses from the valve stand, removing duct work, installing beams over the mill motor, leveling foundation surfaces in the areas for better alignment of the machine, and fabricating and installing piping. The outage was scheduled for 10 days, but GEM successfully completed the task in only eight.

“GEM has always been willing to go the extra yard to satisfy the owner’s project requirements no matter how challenging the situation,” said George Traynor, Arconic Project Manager.

Images from left to right:

GEM’s Mechanical Division removing the old ALCOA signs and the completed Arconic sign that was installed by GEM.

An image of the gear box replacement. 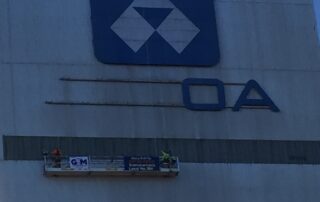 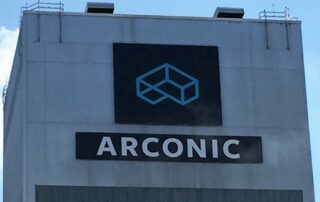 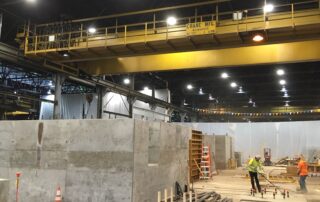 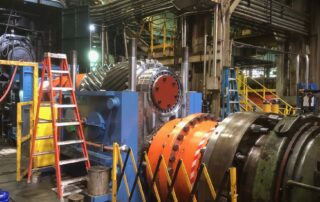